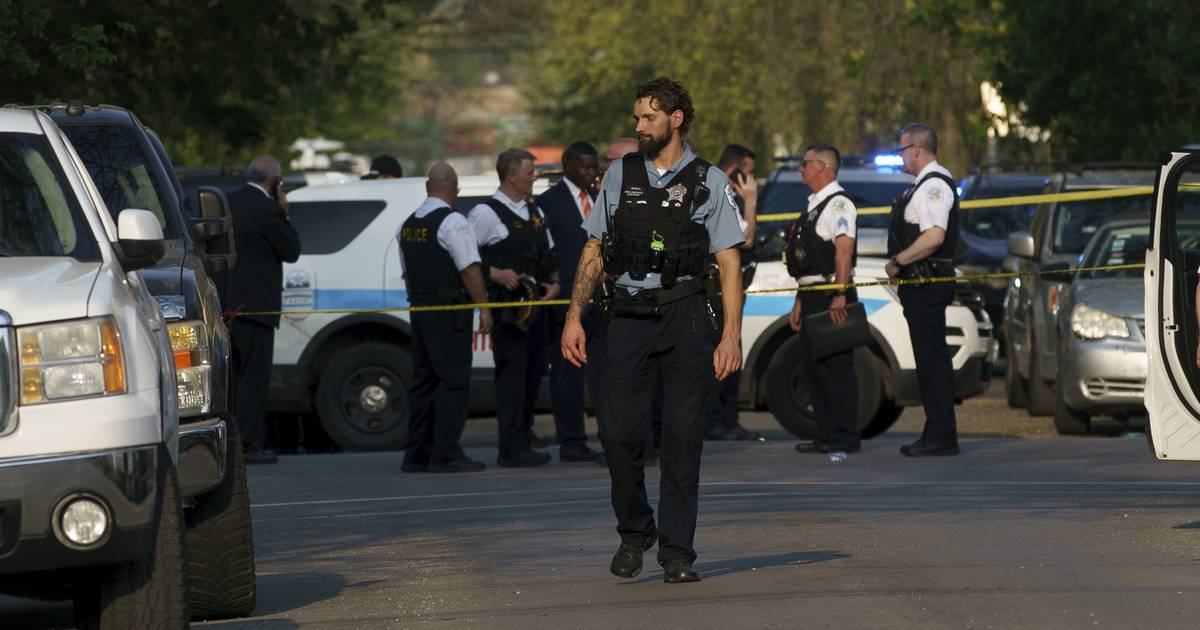 A 19-year-old boy was killed and four other teenagers were injured in a shooting in the Back of the Yards neighborhood on Tuesday afternoon, police said.

Officials responded to reports of shootings on West 48th and Southern Hell streets around 4:30 p.m. A 19-year-old man was pronounced dead at the scene after being shot in the head and left side of the body, police and fire. officials said.

“They were met by a hostile crowd,” he said, adding that people had started a fight with police officers.

Two people are in custody for a fight with officers, Jerome said.

The victims were standing on the street when a red Mazda stolen by police drove by and people got out of the car and started shooting at the victims.

They got back in the car, fled the scene and crashed into several blocks about 4,500 blocks on South Marshfield Avenue, Jerome said. Police are still searching for people who were in the car, but they found two weapons from the car, Jerome said.

According to him, a third weapon was found from the place of the shooting.

The 16-year-old was injured in the left shoulder, arm, face and ankle and was taken to the University of Chicago Medical Center in critical condition, police said in a media report.

Journalists and members of the community later heard of nine shots fired a few blocks from the media site.

Police said ShotSpotter found the shots “on the other side of the railroad tracks,” that is, south of 49th Street, but it was too early to know if it was related to a previous shooting.

Residents sat on their porches and on the steps of the store on the corner of West 48th Street and South Boulevard Lumis, talking about the shootings in their community.

One resident, who lives a few blocks from the site of Tuesday’s shooting, said he heard gunshots several times a week and they became more frequent after a close friend was shot dead in April. The man asked not to recognize him for fear of revenge.

He has five children, four of whom are between 5 months and 4 years old, and the oldest is 15. The children were playing on the sidewalk in front of their apartment on Tuesday night after returning from the store on the corner with snacks and drinks in hand.

The man said he has lived in the area for 15 years. On Tuesday afternoon, he said he heard 40 to 50 shots fired from the street where five people were shot.

“I don’t want my kids to go through the same thing I grew up with,” he said. “But what can we do with the high rents happening in Chicago? We have no choice but to move to gang-infected areas. “

He said gun violence in Chicago is not only the fault of parents, it is also a problem of society. Communities need more programs to keep young people out, he said.

He said he was concerned for the safety of his family.

The shootings have increased since his friend was shot dead on April 6, the man said.

According to media reports from police, a 30-year-old man was shot dead in the 4800 quarter in Lumis at 9:16 a.m. on April 6. The man was in a parked car when an SUV drove up and someone inside opened fire.

Near the place of execution on April 6, tall candles with saints, Jesus and the Virgin Mary stand in a wooden fence, as well as bottles of wine used as vases for dying roses, a bottle of tequila and a bottle of alcohol. A wooden cross with a rosary and a pink ribbon leaned against the fence above the candles.

In the door of the house mail came out of the mailbox, on the steps leading to the porch, there were some envelopes.

At the bottom of the block, when police dispersed people from the shooting scene on Tuesday around 7pm, a Mexican gang erupted from someone’s backyard as some neighbors returned inside while others continued to talk on their porch.