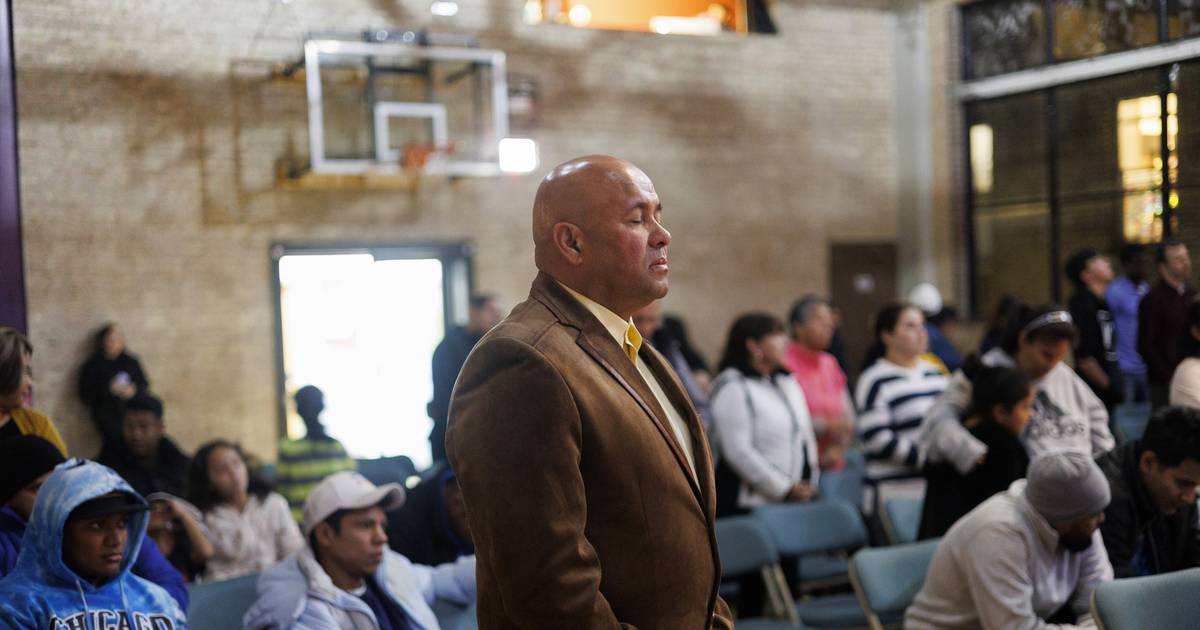 A former gender-based violence attorney, a fast-food restaurant manager, a police officer and other migrant men joined churchgoers around tables in the basement Wednesday night.

For most of these migrants, this is their first time eating Thanksgiving.

After a bilingual service, New Life Community Church in Little Village hosted a holiday dinner for worshipers and a group of about 10 migrant men — mostly asylum seekers from Venezuela — from two different shelters in the city.

“I forgot to thank God for the turkey because I’ve never had turkey before. I’ve had sliced ​​turkey, but a whole turkey, right? No, Jose Luis Cordero Arismendi, 49, said in Spanish between smiles.

He was dressed in a brown velvet suit for a festive dinner, during which there was lively conversation and children running around.

New Life Community Church and its nonprofit New Life Centers have found food as a tool for building community. In fact, it is not surprising, given the extensive experience of the Centers of New Life a food distribution operation that feeds thousands of people every week in Chicago. The nonprofit also offers violence prevention services to the Little Village community, including outreach, after-school care, tutoring and athletic opportunities.

New Life Centers Executive Director Matt DeMatteo said the nonprofit gathers migrant families from Venezuela, Nicaragua, Guatemala and Colombia who now live on the city’s south and west sides and brings them together on Sundays for a Spanish-language church service and a meal. after.

One day a lady brought a huge bowl pazole, a Mexican soup, DeMatteo said. It was enough to feed more than 150 people.

“For us, it’s not about food. Food is the hook. Food is the entrance, like the door,” he said. “But for us, it’s about relationships and connecting them to the community.”

Sometimes after Sunday services, Pastor Chris Ophus notices migrants leave to eat lunch with local families, some of whom are Hispanic or Latino. He said migrants can bond with each other and with these families through similar experiences of coming to the U.S. in hopes of a better life.

“Which is cool because there are so many people who are at different points in their immigrant history: people who came 20 years ago and whose kids are going to college now; people are quite recent, but settled; and other people who just got here,” Ophus said. “I think we can give hope to the people who come.”

Sitting at a table with a handful of other migrants on Wednesday, Cordero Arismendi shared a little about his life. He was a lawyer in Venezuela before moving to Colombia in 2014. This year he migrated to the United States, crossing the borders of seven countries and arriving in Chicago by bus from Texas two months ago.

On his way north, he survived disease-carrying mosquitoes, contaminated drinking water, armed robbery, heat and scorching sun, and many other ordeals.

“Chicago is a city that opened its doors to me, and it’s a city I don’t want to leave,” he said.

Cordero Arismendi said he has a lot to be thankful for: He just learned that Loyola University will validate his law degree if he meets certain requirements, such as achieving a certain level of English proficiency.

Among the Venezuelan men at the table next to Cardero Arismendi were a former policeman, a mechanic and a machine operator. Some of them wanted to settle in Chicago, some wanted to return home someday. But they all had one thing in common: they came to the United States hoping to work honestly.

“I like this city,” said Jean Carlos Paez, 25, a Venezuelan who first moved to Colombia, where he worked as a manager at a hamburger and hot dog store. He said he wants to stay in Chicago and hopes to study business administration. “I came for this purpose to improve myself,” he added in Spanish.

At the end of the dinner, Pastor Francisco “Paco” Amador led a prayer with a group of men, asking God to help them make Chicago a better place.

“These are people who are displaced, who are hurting… They have been through a lot, but they were striving for a better life,” Mark Job, founding pastor of the New Life Church community and president of the Moody Bible Institute, told the Tribune. “These are people just trying to survive.”